Would have beena great fiction story...if it was fiction
Post Reply
7 posts • Page 1 of 1

United States copyright regulators are agreeing with Wikipedia's conclusion that a monkey's selfie cannot be copyrighted by a nature photographer whose camera was swiped by the ape in the jungle. The animal's selfie went viral.

The US Copyright Office, in a 1,222-page report discussing federal copyright law, said that a "photograph taken by a monkey" is unprotected intellectual property.

Wikipedia says the public, not the photojournalist, owns the rights to ape's pic.
"The Office will not register works produced by nature, animals, or plants. Likewise, the Office cannot register a work purportedly created by divine or supernatural beings, although the Office may register a work where the application or the deposit copy state that the work was inspired by a divine spirit," said the draft report, "Compendium of US Copyright Office Practices, Third Edition." [PDF]

The report comes two weeks after Wikimedia, the US-based operation that runs Wikipedia, announced that the public, not British photojournalist David Slater, maintains the rights to the selfie and the other pictures the black macaca nigra monkey snapped. The monkey hijacked the camera from Slater during a 2011 shoot in Indonesia and took tons of pictures, including the selfie.

The picture is among the thousands Wikipedia makes available for free under its Wikimedia Commons, a fact that Slater says is costing him royalties. The picture went viral in 2011 when the media reported on the selfie. "He must have taken hundreds of pictures by the time I got my camera back, but not very many were in focus. He obviously hadn't worked that out yet," Slater told The Telegraph in July 2011 as he described the monkey taking his gear.

Federal regulators said the report, released Tuesday, "presents more than 1,200 pages of administrative practices and sets the stage for a number of long-term improvements in registration and recordation policy." It is to take effect "around" December 15, regulators said.

Under UK federal law, however, Slater could claim the intellectual property rights to the picture—even if he didn't press the shutter—if the image is part of his "intellectual creation." However, The Telegraph said "such a case has never been tried in court." 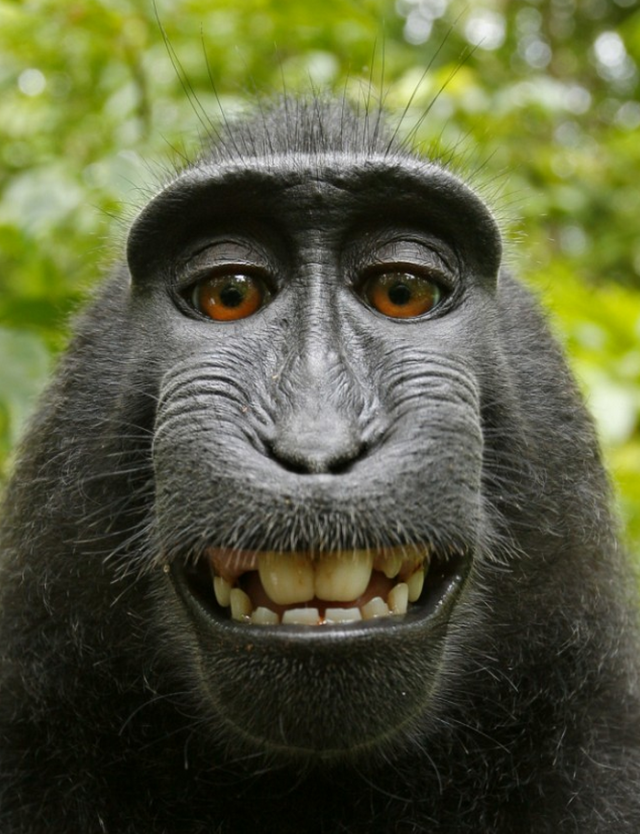 So I wasted my money on all those monkeys and typewriters?
The truth may be out there, but lies are inside your head.
Top

So I wasted my money on all those monkeys and typewriters?

Never judge anyone until you have biopsied their brain.

"Be kind, for everyone is fighting a hard battle."
Known Some Call Is Air Am
Spoiler:
Non sum qualis eram = "I am not who I will be"
Top

So I wasted my money on all those monkeys and typewriters?

Damn, wish I had thought of that.
#slowclap
"Never fuck with The Culture"
Sublime In Peace Iain M. Banks.
Top

Reminds me of this from a further back. At least if Planet of the Apes ever were to occur, we can be sure they'd all be too busy with electronic devices just like we are.
Top

Reminds me of this from a further back. At least if Planet of the Apes ever were to occur, we can be sure they'd all be too busy with electronic devices just like we are.


It's actually true that gorillas just LOVE moving pictures. In zoos and safari parks all over the world, they use TV to keep the gorillas out of the way while the keepers clean out their quarters.

The truth may be out there, but lies are inside your head.
Top

All I can imagine is the monkey saying something afterwards like "OMG that was like, the best selfie ever! I can't even!"
I'm not Evil. I'm Corporate.
Zombie Catfish.
Top
Post Reply
7 posts • Page 1 of 1